During the period from 1967 to 1969, Albert C. Church traveled to and lived in Japan at the request of his instructor, Kim Chi Koh, Shorinji Tekken Ryu, (Japanese pronunciation of the Korean name), Head Family. Late in 1967 Church sensei was named the arts successor of Shorinji Tekken Ryu and received the Soden, scroll of transmission.

In Korea this art was known as So Rim Sa Churl Kwon Do, (Young Forest Temple, Iron Fist Method). The style blended with the laws of Hwarang-do, the ethical code developed by Korean warriors in the 6th century. Chinese hand forms were blended with the Korean Tae Kyon forms into a somewhat strong system of self-defense. The armies of Japan occupied Korea, in the late 1880's, bringing with them the art of jujutsu, which was later used by Master Koh to enhance this style.

In 1950, as a member of the 1st Provisional Marine Brigade, stationed in Korea, Albert Curtis Church, Jr., began studying So Rim Sa Churl Kwon Do under the current Head Family (at that time), Master Kim Chi Koh.

Church sensei was rotated stateside in 1952 where upon he began teaching Master Koh's art.

The style moved to Japan, Mishima-shi, Shizuoka-ken, in 1956, when Master Koh sought medical treatment which was not available in the battle torn Korean nation. In the Japanese language, the system was then called Shorinji Tekken Ryu.

Note: Past documentation has reported that Master Koh had actually changed his name from Wang to Koh when he left Korea. Lack of proper documentation cannot pinpoint the exact name he used while living in Korea.

The name "Wang" in Korean means "yellow". When a direct translation of the name from Korean to Japanese is performed the last name changes to "Ko". Ko in Japanese means "yellow". A phonetic spelling of "Ko" that is often used is "Koh", as what is used within this website.

In May, 1967, Master Koh called for Church sensei to study with him in Japan. Late in 1967 Church sensei was named the arts successor and upon Master Kohs death, received the soden, scroll of transmission and became the next lineage Head Family of Shorinji Tekken Ryu, and related arts.

Kamishin Ryu
While living and training in Japan, Church sensei became close friends with Shogo Kuniba, Soke (by succession), of Ryukyu Karate-do Motobu-ha, Nippon Karate-do Shito Ryu. Kuniba sensei sponsored Church sensei before the Zen Nippon Kodudo Renmei and Zen Nippon Karate-do Renmei of Kyoto and Osaka after reviewing the Shorinji Tekken Ryu Soden that Church sensei received. It was decided at that time that the art of Shorinji Tekken Ryu should be renamed as Nippon Kobudo Kamishin Ryu. Therefore the newly founded name of this art was officially released in Japan in 1968.

A special scroll was prepared by Kuniba sensei and presented to Church sensei, in Japan, in 1968.

In 1969, prior to Church sensei's return to the United States, Kuniba sensei presented Church sensei with a kanban, (formal teaching authorization sign).


After receiving the authorization and support of Shogo Kuniba, Church sensei returned to the United States to teach the newly renamed art of Nippon Kobudo Kamishin Ryu. It was Church sensei's goal for his students to train within the teachings of Japanese budo.

The organization Church sensei began shaping eventually flourished with over 7,000 registered students. Then in the mid 1970's time frame after a series of events, the organizational structure began to falter. When the dust settled, events found the hombu (headquarters school) dojo closing, and much of the top-level structure in confusion. Church sensei had literally become inaccessible and was not seen for approximately one year. During this time, a number of top-level students stepped away from the art. However, once Church sensei was back on the scene and the hombu re-opened, the residual effects from the confusion that started in the mid 1970's never seemed to disappear.

Then unexpectedly in 1980, Church sensei died.

The Shindenkan
Shindenkan Budo Renmei, was organized in the year 2000 to promote the art of Shorinji Tekken Ryu/Nippon Kobudo Kamishin Ryu.

Kamishin Ryu's teachings are jujutsu in nature and consist of a cohesive blend of Japanese based martial arts. The art emphasize's the control, joint locChing, chocChing, throws and fluidity of jujutsu with effective atemiwaza.

A few of this system's principles are briefly listed below...
these principals are not listed in any particular order:

...to/from
-always draw to and proceed from...points of strength.

...duality
-keep in/yo active within everything.

...ebb and flow of power
-projecting/redirecting

...in/yo-no-kamae
-the dual nature of postures.

Kamishin Ryu traces part of its modern heritage back through Church sensei's association with Okuyama sensei, Hakko Ryu Head Family. Hakko Ryu as a traditional martial art has direct lineage influences from Daito Ryu. It combines the grappling sChills of ancient Japan, with striChing nerve/meridians within the body. While living in Japan in the late 1960's, Church sensei trained at the Hakko Ryu hombu dojo with Okuyama sensei. The Kamishin website includes archival photography during this time frame.

Within Japan, jujutsu is the largest traditional soft style martial art today. Jujutsu uses principles of countering an attack by using the opponent's strength against himself. StriChing techniques (atemiwaza) based on pressure points, are used along with joint manipulations and throws to subdue and control an opponent. The fundamentals of jujutsu are very simple to learn and truly is a martial art for all ages. On the other hand, the advanced methods of jujutsu take years of dedicated study.

Petit sensei began sword training in 1973. At that time the training methods taught to him were based on the Mugai Ryu Iai system, as taught to Church sensei by Shogo Kuniba. Since Church sensei's death, in 1980, Petit sensei maintained and passed on these foundation teachings to his students.

Petit sensei began training in the art of Omote Senke Chanoyu (the art of tea) under Ayako Minomo Sacks, shihan, in 2000. The tea ceremony is a unique expression of Japanese culture that elevates the taChing of tea to an art form. A variety of refined objects is employed within the tea ceremony which includes: kettles, tea containers, tea scoops, tea bowls, tea whisks, hanging scrolls, water containers and flower vases. The harmonious arrangement and graceful use of these objects are at the heart of the tea ceremony, for this is what shows the host's appreciation for tea and feeling for beauty. 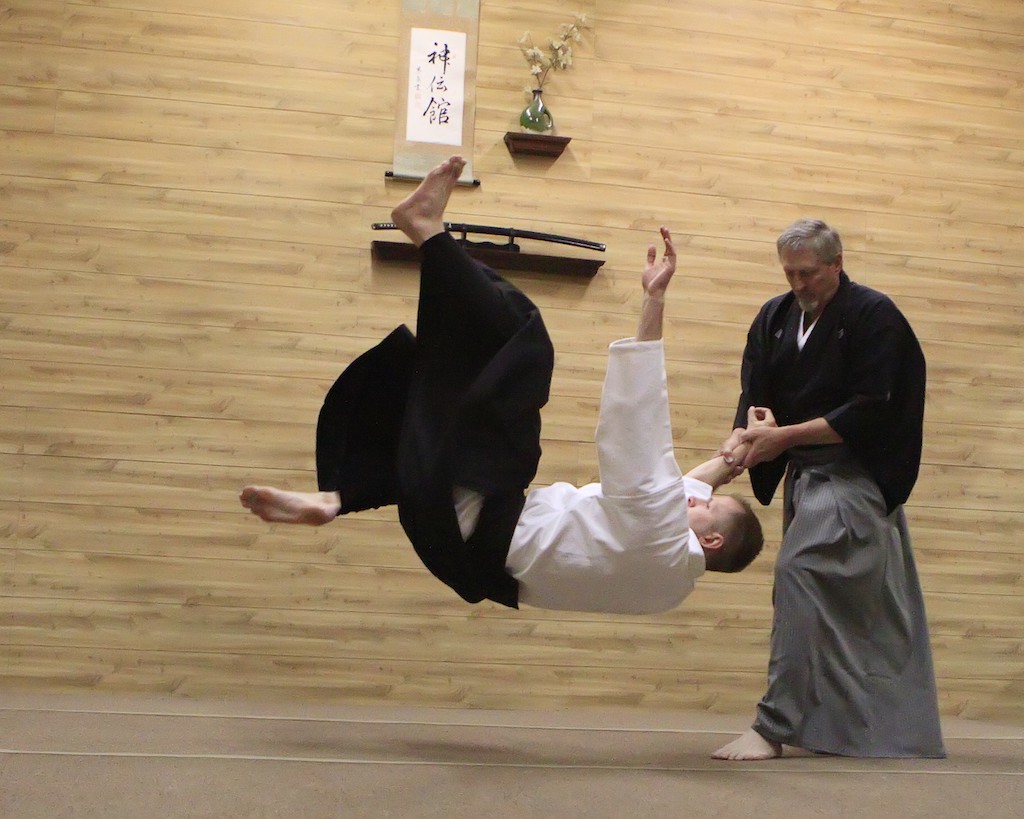